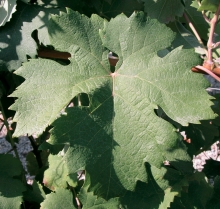 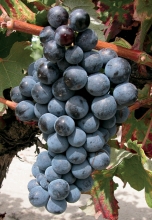 Aubun would appear to originally be from the Vaucluse.
Synonyms

In France, this variety can officially be called "Murescola" regarding plant propagation material.
Legal information

In France, Aubun is officially listed in the "Catalogue of vine varieties" on the A list and classified.
Use

The identification is based on:
- the tip of the young shoot hwith a high density of prostate hairs,
- the shoots with red striped internodes,
- the adult leaves with five or seven lobes, U-shaped lateral sinuses with often a tooth inside, a slightly open or closed petiole sinus with often a tooth on the edge, moderate teeth with convex or straight sides, moderate anthocyanin coloration of veins, undulate between the veins, a revolute leaf blade, and on the lower side of the leaves, a medium to high density of prostate hairs,
- the round-shaped or obovoid berries.
Genetic profile

Aubun has a semi-erect bearing. It is a fertile and rather rustic variety.
Susceptibility to diseases and pests

This variety is not very susceptible to grey rot and powdery mildew. On the other hand, it is quite sensitive to downy mildew and vine leafhoppers.
Technological potentiality

The bunches and berries are large. Under fertile conditions, this variety has difficulty to color its berries and alcoholic degrees are low. The red wines produced are usually ordinary and without finesse, but this Aubun can be used to produce pleasant rosé wines.
Clonal selection in France

The two certified Aubun clones carry the numbers 168 and 350. A conservatory of 3 clones was planted in the French department of Vaucluse in 2001.
Bibliographic references