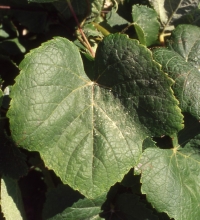 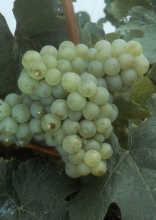 This variety is originally from the north east of France (Lorraine) and, based on published genetic analyses, it would result from the crossbreeding of Gouais blanc and Pinot.
Synonyms

In France, Aubin vert is officially listed in the "Catalogue of vine varieties" on the A list and classified.
Use

The identification is based on:
- the tip of the young shoot with a medium to density of prostate hairs,
- the green young leaves with bronze spots,
- the shoots withs red internodes,
- the adult leaves with three lobes, a V-shaped or with parallel lobes petiole sinus, a weak anthocyanin coloration of veins, a slightly undulate leaf blade and on the lower side of the leaves, a medium density of prostate hairs,
- the round-shaped or obovoid berries.
Genetic profile

Aubin vert is rather fertile and productive and must be moderately pruned.
Susceptibility to diseases and pests

The bunches are large and the berries are medium in size. Aubin vert produces common wines, not very alcoholic and relatively acidic.
Clonal selection in France

There is no certified clone for this variety yet. Surveys have recently been carried out in vineyards of the north-east of France.
Bibliographic references