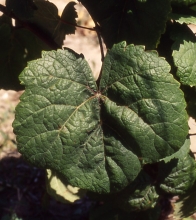 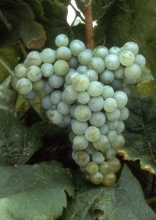 This variety is originally from the north east of France (Lorraine) and based on published genetic analyses, it would result from the crossbreeding of Gouais blanc and Savagnin.
Synonyms

In France, Aubin is officially listed in the "Catalogue of vine varieties" on the A list and classified.
Use

The identification is based on:
- the tip of the young shoot with a high density of prostrate hairs,
- the green young leaves with bronze spots,
- the shoots with red striped internodes,
- the adult leaves with three lobes, U-shaped open lateral sinuses, a closed petiole sinus with overlapping lobes, short teeth compared to their width at the base with straight or convex sides, a strong anthocyanin coloration of veins, a revolute, goffered and blistered leaf blade, and on the lower side of the leaves, a medium density of erect and prostrate hairs,
- the round-shaped berries.
Genetic profile

Aubin is not very vigorous, early and moderately fertile. It must be planted in areas where the risk of spring frost is low because of its very early budburst.
Susceptibility to diseases and pests

Aubin does not seem particularly susceptible to diseases.
Technological potentiality

The bunches are medium in size and the berries are small. Aubin produces average quality wines, not very aromatic and moderately acidic.
Clonal selection in France

The only certified Aubin clone carries the number 1262.
Bibliographic references