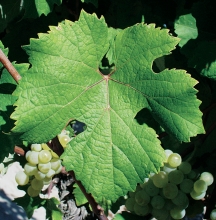 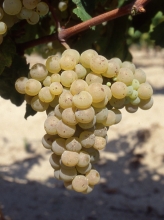 Arrufiac is a native variety from the south west of France (Adour valley).
Synonyms

In France, this variety can officially be called "Arrufiat" regarding plant propagation material.
Legal information

In France, Arrufiac is officially listed in the "Catalogue of vine varieties" on the A list and classified.
Use

The identification is based on:
- the green young leaves with slightly bronze spots,
- the shoots with red or red striped internodes,
- the adult leaves with U-shaped deep lateral sinuses with a fairly frequet tooth inside, with often naked petiole veins, a strong anthocyanin coloration of veins and petioles, a blistered, undulate leaf blade and on the lower side of the leaves, a low density of prostrate hairs,
- the conical-shaped grape clusters, a little compact,
- the round-shaped or slightly ovoid berries.
Genetic profile

This variety has good vigor. Its fertility is generally good but can be irregular. It can sometimes be susceptible to millerandage.
Susceptibility to diseases and pests

Arrufiac is rather susceptible to downy mildew and black rot.
Technological potentiality

The bunches are large and the berries small with thick skin. This variety has an interesting qualitative potential, particularly regarding its aromas and its typicity.
Clonal selection in France

The five certified Arrufiac clones carry the numbers 405, 652, 653, 921 and 922. Two conservatories were set up in 1996 and 1997 in the French departments of Gers and Hautes-Pyrénées to preserve approximately 150 clones.
Bibliographic references