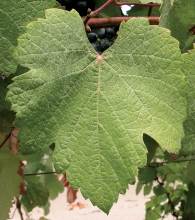 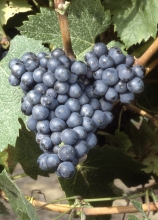 This variety is originally from the Pyrénées-Atlantiques.
Synonyms

In France, Arrouya is officially listed in the "Catalogue of vine varieties" on the A list and classified.
Use

The identification is based on:
- the tip of the young shoot with a hight density of prostrate hairs,
- the green young leaves with bronze spots,
- the circular adult leaves, entire or with three lobes, with shallow lateral sinuses, an open petiole sinus, short to medium teeth with straight or convex sides, a flat, slightly undulate leaf blade and on the lower side of the leaves, a medium to high density of erect and prostrate hairs,
- ellipsoid berries.
Genetic profile

Arrouya has good vigor, not very fertile when pruned short, but becomes fairly productive when pruned long. Due to its late maturing, it must be planted in hot climate.
Susceptibility to diseases and pests

The bunches are medium in size and compact, while the berries are very small to small. Arrouya produces common wines, rather acidic, not very colored but astringent with sometimes a little bit of bitterness.
Clonal selection in France

The only certified Arrouya clone carries the number 1112.
Bibliographic references