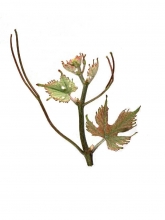 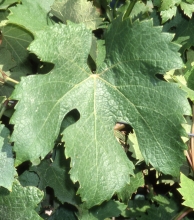 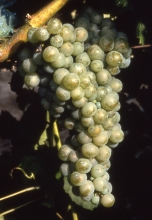 This variety was obtained in 1954 by INRA by crossbreeding Raffiat de Moncade and Sauvignon.
Synonyms

In France, Arriloba is officially listed in the "Catalogue of vine varieties" on the A list and classified.
Use

The identification is based on:
- the green young leaves with bronze spots,
- the adult leaves with three lobes (rarely five lobes), an open U-shaped petiole sinus, long teeth with straight sides, a moderate anthocyanin coloration of veins, a twisted, involute leaf blade, and on the lower side of the leaves, a low to medium density of erect and prostrate hairs,
- the round-shaped berries.
Genetic profile

This variety is vigorous, fertile and productive. It is sometimes susceptible to dessication of the stems and would appear well adapted to machine harvesting.
Susceptibility to diseases and pests

The bunches are medium in size and the berries are very small. The wines produced are quite fine and slightly aromatic.
Clonal selection in France

The only certified Arriloba clone carries the number 762.
Bibliographic references