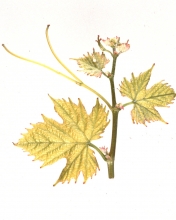 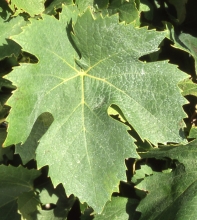 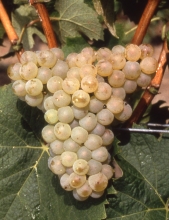 This variety was obtained in 1961 by INRA by crossbreeding Grenache gris with Saint-Pierre doré.
Synonyms

In France, Aranel is officially listed in the "Catalogue of vine varieties" on the A list and classified.
Use

The identification is based on:
- the tip of the young shoot with a medium density of prostate hairs,
- the green young leaves,
- the adult leaves with three or five lobes, a closed petiole sinus with often a tooth on the edge, short to medium teeth compared to their width at the base with straight sides, no anthocyanin pigmentation of veins, a blistered, twisted leaf blade and on the lower side of the leaves, a low to very low density of prostate hairs,
- the round-shaped berries.
Genetic profile

Bud burst: 9 days after Chasselas.
Grape maturity: mid-season, 2 weeks and a half Chasselas.
Suitability for cultivation and agronomic production

This variety is fairly fertile and has an erect bearing. It can be pruned short and gobelet trained.
Susceptibility to diseases and pests

The only certified Aranel clone carries the number 879.
Bibliographic references