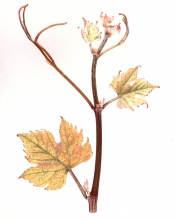 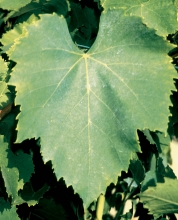 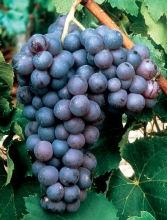 This variety from the Languedoc is, based on published genetic analyses, probably a descendant of Gouais blanc and Ouliven.
Synonyms

In France, Aramon is officially listed in the "Catalogue of vine varieties" on the A list and classified. This variety is also listed in the catalogues of other Member States of the European Union: Cyprus and Portugal.
Use

The identification is based on:
- the tip of the young shoot with a high or very high density of prostrate hairs and a piping anthocyanin coloration,
- the green young leaves with bronze spots,
- the adult leaves with three lobes, a V-shaped open petiole sinus, small teeth, long compared to their width at the base, straight sides or with one side concave and one convex, and an involute leaf blade,
- the round-shaped berries.
Genetic profile

Aramon is a very fertile variety, wih low vigor and has a drooping bearing. It must be short pruned. In hot climates and too fertile soils, it sometimes has a tendancy to become depleted. It is sensitive to heat ("sunburn").
Susceptibility to diseases and pests

Aramon is not very susceptible to powdery mildew but can be more affected by downy mildew and phomopsis. It is also very sensitive to mites.
Technological potentiality

The bunches are large and the berries very large. This variety is very productive and generally produces not very characteristic products that lack color. Berries' sugar accumulation potential is low.
Clonal selection in France

The five certified Aramon clones carry the numbers 204, 323, 324, 325 and 401. A conservatory of almost 80 clones was planted in 1997 in the French department of Aude.
Bibliographic references