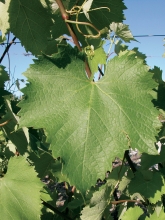 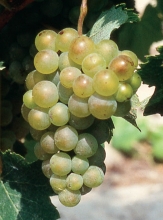 Altesse is a native variety from the Savoie region.
Synonyms

The identification is based on:
- the young leaves that are very bronzed,
- the small adult leaves, with three lobes, an open U-shaped petiole sinus, long teeth compared to their width at the base with convex sides, a slightly involute, leaf blade, curly on the edges, and on the lower side of the leaves, a low to medium density of prostrate hairs and a moderate density of erect hairs,
- the round-shaped berries.
Genetic profile

This delicate variety is very sensitive to downy mildew, phomopsis, rust mites and to powdery mildew. It is also very susceptible to grey rot.
Technological potentiality

The bunches are small to medium in sized and the berries are small. This variety has a good qualitative potential. It produces generous, full-bodied wine, rich in aromas, elegant and delicate, with ageing capacity.
Clonal selection in France

The three certified Altesse clones carry the numbers 265, 403 and 404. A conservatory of ten or so clones was planted in the French department of Savoie in 2014.
Bibliographic references