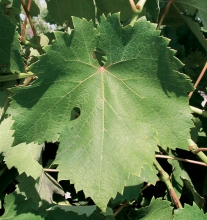 This variety of unknown origin was developed starting from the second half of the 19th century. Based on published genetic analysis, it would result from a crossbreeding of Gros Colman and Muscat de Hambourg.
Synonyms

In France, Alphonse Lavallée is officially listed in the "Catalogue of vine varieties" on the A list. It is classified as a wine grape variety only in some French department (see the regulations in force). This variety is also listed in the catalogues of other Member States of the European Union: Austria, Bulgaria, Spain, Italy and Portugal.
Use

The identification is based on:
- the tip of the young shoot with a very high density of prostrate hairs,
- the young leaves that are yellow with very bronze spots or reddish,
- the large circular or wedge-shaped adult leaves, with five lobes, shallow lower lateral sinuses, a slightly open U-shaped or with slightly overlapping lobes petiole sinus, long teeth compared to their width at the base with convex or straight sides, medium anthocyanin coloration of veins, an involute, blistered leaf blade, and on the lower side of the leaves, a medium density of erect and prostrate hairs,
- the berries that are round, with sometimes an irregular cross section.
Genetic profile

This vigorous and productive variety, has a horizontal or drooping bearing and is generally pruned short. It can however be trained and long pruned. Alphonse Lavallée is essentially used for the production of table grapes.
Susceptibility to diseases and pests

Alphonse Lavallée is fairly susceptible to powdery mildew and phomopsis. In the absence of berry bursting, Alphonse Lavallée's clusters are not very sensitive to grey rot since they are loose.
Technological potentiality

The bunches are medium to large and the berries are very large. The skin is thick and crunchy. The pulp is firm and juicy. When cultivated as table grapes, this slightly aromatic variety has very good aptitude for storage and travels well. When vinify, Alphonse Lavallée makes common and ordinary wine, with moderate color, medium alcohol levels and not very acidic.
Clonal selection in France

The three certified Alphonse Lavallée clones carry the numbers 319, 797 and 798. These different clones are mainly used for the production of table grapes.
Bibliographic references