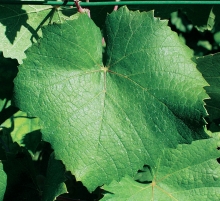 Based on published genetic studies, this variety grown in Bourgogne (Burgundy) would result from the crossbreeding of Pinot and Gouais blanc.
Synonyms

In France, Aligoté is officially listed in the "Catalogue of Vine varieties" on the A list and classified. This variety is also listed in the catalogues of other Member States of the European Union: Bulgaria, Cyprus, Romania and the Czech Republic.
Use

The identification is based on:
- the green young leaves with bronze spots,
- the shoots with red internodes,
- the entire adult leaves, with a V or U-shaped slightly open petiole sinus, medium length teeth compared to their width at the base with straight sides, a high anthocyanin coloration of veins, a revolute leaf blade, and on the lower side of the the leaf, a low density of erect and prostrate hairs,
- the round-shaped berries.
Genetic profile

Bud burst: 2 days after Chasselas.
Grape maturity: early-season, 1 week and a half after Chasselas
Suitability for cultivation and agronomic production

Aligoté is a fertile variety adapted to northern areas. It is frequently affected by millerandage.
Susceptibility to diseases and pests

This variety is not very affected by powdery mildew, but is quite susceptible to downy mildew and grey rot.
Technological potentiality

The bunches and the berries are small. Aligoté wines are lively and thus are not suitable for ageing. Depending on the terroir, the vintage and the yeilds, they are more or less aromatic and can display a particular typicality.
Clonal selection in France