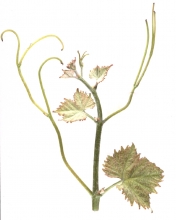 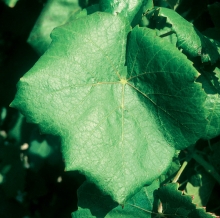 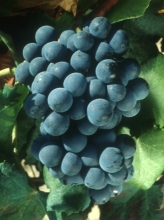 This variety was obtained by Louis and Henri Bouschet in 1855 at Mauguio (Hérault) by crossbreeding Grenache with Petit Bouschet (Aramon X Teinturier du Cher).
Synonyms

In France, Alicante Henri Bouschet is officially listed in the "Catalogue of Vine Varieties" on the A list and classified. This variety is also listed in the catalogues in other Member States of the European Union: Bulgaria, Cyprus, Spain, Greece, Italy and Portugal.
Use

The identification is based on:
- the tip of the young shoot with a very high density of prostate hairs and a piping anthocynanin coloration,
- the green young leaves with bronze spots,
- the shoots with red-striped internodes,
- the entire adult leaves with medium vein anthocyanin coloration, a revolute, a shiny and smooth leaf blade whose anthocyanin colorotion becomes intense in autumn and on the lower side of the leaves, a medium to high density of prostate hairs,
- the round-shaped berries with a colored pulp,
- the canes that are generally yellow.
Genetic profile

This variety is quite vigorous but must be short pruned because it tends to become depleted. It is also quite sensitive to wind.
Susceptibility to diseases and pests

Alicante Henri Bouschet is not very sensitive to powdery mildew. However, it is quite susceptible to downy mildew, phomopsis, flavescence dorée and to bacterial necrosis. It is also susceptible to wood diseases.
Technological potentiality

The bunches are medium to large and the berries are medium in size. This teinturier variety is essentially used for its color input. Wines obtained have a good body, are often flat and are lacking finesse and elegance.
Clonal selection in France