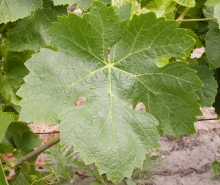 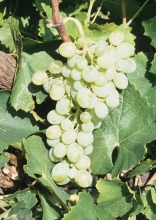 In France, Aledo is officially listed in the "Catalogue of vine varieties" on the A list. This variety is also listed in the catalogues of other Member States of the European Union: Portugal and Spain.
Use

The identification is based on:
- the tip of young shoot with a low density of prostate hairs,
- the green young leaves,
- the circular adult leaves, with three or five lobes, shallow lateral sinuses, a closed V-shaped petiole sinus, short teeth with straight sides, no anthocynanin pigmentation of veins, a finely blistered and slightly twisted leaf blade, and on the lower side of the leaves, no erect and prostate hairs,
- the ellipsoid berries.
Genetic profile

Aledo has an average vigor and a semi-erect bearing. This variety is susceptible to millerandage, must be trained and can be managed with short or long pruning.
Susceptibility to diseases and pests

Aledo is not very susceptible to grey rot.
Technological potentiality

Aledo's bunches are moderately compact and medium in size. The berries are large, simple-flavored with a thick skins and a not very juicy pulp. Aledo's grapes conserve well on the vine trunk and have a good transport capacity.
Clonal selection in France

The only certified Aledo clone carries the number 6008.
Bibliographic references