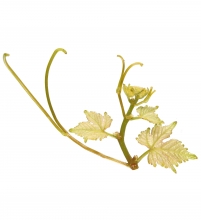 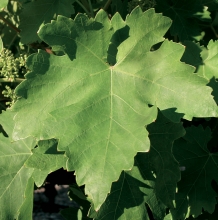 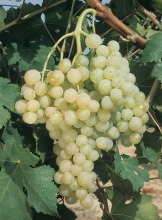 This variety was obtained by Mr. Courtiller in the 19th century in the Saumur region. Based on genetic analyses carried out in Montpellier, it would result from the crossbreeding of Bicane and Chasselas.
Synonyms

In France, Admirable de Courtiller is officially listed in the "Catalogue of vine varieties" on the A list.
Use

The identification is based on:
- the tip of the young shoot with a medium to high density of prostrate hairs,
- the green young leaves with bronze spots,
- the pentagonal adult leaves with five or seven lobes, a slightly open U-shaped petiole sinus or with slightly overlapping lobes, medium teeth with convex sides, no anthocyanin coloration of veins, a smooth, shiny leaf blade and on the lower side of the leaves, a medium density of erect hairs and, no or very low density of prostrate hairs,
- the berries that are ellipsoid or ovoid, and which can become slightly pink when overripe.
Genetic profile

Admirable de Courtiller displays low to moderate vigor and has a semi-erect bearing. Its yield potential is moderate. It has a tendancy to produce a lot of grappillons and is sometimes sensitive to coulure and millerandage. It is preferable to grow Admirable de Courtiller on dry and well-exposed terrains.
Susceptibility to diseases and pests

Admirable de Courtiller's bunches are medium in size and not very compact. The berries are medium to large in size, simple-flavored with a thin to medium skin and a juicy pulp.
Clonal selection in France