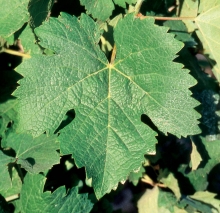 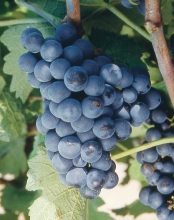 This variety is probably originally from the Lot-et-Garonne (the area around Villeréal). It was reported at the end of the 19th century by Numa Naugé.
Synonyms

In France, Abouriou is officially listed in the "Catalogue of vine varieties" on the A list and classified.
Use

The identification is based on:
- the tip of the young shoot with a high density of prostrate hairs and a piping distribution of anthocyanin coloration,
- the green young leaves with bronze spots,
- the circular adult leaves with five lobes, fairly deep lateral sinuses, an open lyre-shaped petiole sinus, moderate length teeth with straight sides, no anthocyanin coloration of veins, a blistered, twisted leaf blade, and on the lower side of the blade, a low density of prostrate and erect hairs,
- the berries that are round or slightly ellipsoid.
Genetic profile

Due to its earliness, its fertility (possibility of short pruning) and its moderate vigor, this variety appears well adapted to difficult and marginal climatic conditions.
Susceptibility to diseases and pests

Abouriou is not very susceptible to diseases and resists fairly well to grey rot.
Technological potentiality

The bunches and the berries are medium in size. This variety produces very colored, full-bodied, rather tannic wines but that lack acidity.
Clonal selection in France

The two certified Abouriou clones carry the numbers 603 and 604. A conservatory of 50 or so clones was planted in 2006 in the French department of Lot-et-Garonne.
Bibliographic references