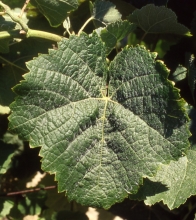 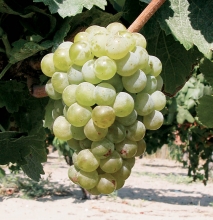 This variety is cultivated in the east of France and was obtained by Mr. Wanner. Based on genetic analysis carried out in Montpellier, it would result from the crossbreeding of Madeleine royale and Kövidinka.
Synonyms

In France, Abondant is officially listed in the "Catalogue of Vine Varieties" on the A list and classified.
Use

The identification is based on:
- the tip of the young shoot with a high density of prostrate hairs,
- the green young leaves,
- the shoots that have green-colored internodes,
- the large, entire adult leaves, with a slightly open petiole sinus with parallel edges or with slightly overlapping lobes, short teeth compared to their width at the base with convex sides, no anthocyanin coloration on veins, a blistered, slightly goffered leaf blade, folded near the petiole sinus, and on the lower side of blade a low density of erect and prostrate hairs,
- the round-shaped berries.
Genetic profile

Bud burst: 3 days before Chasselas.
Grape maturity: mid-season, 2 and a half weeks after Chasselas.
Suitability for cultivation and agronomic production

Abondant is a vigorous variety, fertile when pruned short. Its early budding exposes it to spring frost.
Susceptibility to diseases and pests

The bunches are large and the berries are medium to large. Abondant produces fairly neutral and ordinary white wines.
Clonal selection in France